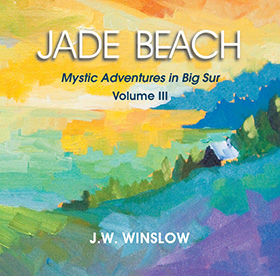 The mystic adventures of Dyanna Falconer reconvene on the first page of Jade Beach, with a wild ride full of surprises. What happened to Dyanna, and where has she been? The story continues in Paris, Sicily, New York and Los Angeles against the background of Big Sur, rich with new lovers and fatal strangers. Dyanna faces the force of nature in a brutal catastrophe that defies imagination, while the art of her life continues to intrigue us. With a strong environmental conscience, she is the ultimate “Green Woman.”

Dyanna Falconer’s adventures take you to the next level of intrigue and romance in an enhanced e-book accompanied by an original score by Tom Ayres. Links in each chapter to visualize maps, stories and photos, plus a video of the author! Available from many popular online stores!

Also available in an ebook edition enhanced with music, links, and art, Jade Beach: Mystic Adventures in Big Sur Volume II is an evocative novel continuing the grand and mystical journey of Dyanna Falconer. From Paris to Sicily, New York, and Los Angeles, Dyanna's journey crosses paths with lovers and antagonists, until a looming natural disaster forces her to make hard choices. A sensual tale pairing adventure, intrigue, and passion amid a backdrop overshadowed by powerful forces of nature, Jade Beach is worthy of being savored as a summer vacation of the mind.
____________________

In "Jade Beach," Winslow's latest book, the author catches up with Falconer, picking up right where Winslow left off in her last book, "Jasmine Dogs: Mystic Adventures in Big Sur Volume 1."

Winslow will host a book launch party from 5-7p.m. Thursday at Homescapes Carmel in Carmel.

It is the second book in a planned six-volume saga, Winslow said."(Jade Beach) was so long, we split it into two parts. Part one we're releasing now, and part two will be released in March," she said. Winslow said "Jade Beach" addresses a lot of the issues and answers questions from the first book.

The author is enamored with her heroine, a Hollywood screenwriter who lives in Big Sur. "She's an amazing woman," said Winslow. "It's a book about living your life under all kinds of different circumstances, good and bad. But most importantly, just being brave and getting through it."

Winslow is also intent on promoting the Big Sur community. "Everything about my work involves this place," she said. "That's what we want to do, show the world about this area, the Central Coast and the beauty of this place."

Content: The daughter of actor Dick Winslow, the author grew up in Hollywood among screenwriters and movie stars, and she puts her insider's knowledge of that milieu to good use in this novel which unfolds in Big Sur, as well as in New York and Europe.

Picking up where "Jasmine Dogs" left off, this episode follows the further adventures of Dyanna Falconer. You'll find out what happened to this exuberant woman and how she was rescued and rehabilitated after the shattering experience that concluded the debut novel.

You'll also meet two very special men, John Soaring Meadow and Jacob Walnut, who now are an important part of Dyanna's life. There's also Uma, who also is there for the heroine to lean on.

Although there's not quite as much violence as there was in "Jasmine Dogs," there's still enough action to keep the story moving and put Dyanna's lover in the hospital. Of course, the tale's narrator isn't shy about sharing her romantic encounters, and there are a few memorable ones!

Part of a projected six-novel series, there's still much to tell about this character's life. Dubbed "the ultimate Green Woman" by her creator, Dyanna Falconer is a woman whose personality and adventures are attracting a lot of attention.

Quote: "There were times in the past few years where I would have given my right arm for an opportunity like this with Jacob, or some other hard-driving mogul who loved the promotion end of my work. They are like a well-oiled machine, thrown into gear at different stages of production to maximize the success and profits. We all know that the movies are a business, bottom line oriented and tough, just like the rest of the Fortune 500. The days of a studio owned by one big guy are over, and most everything now is under an umbrella of some huge conglomerate. Who wants to navigate that system?"

Audience: If you read the first novel in this series, naturally you'll want to see what has transpired since "Jasmine Dogs" ended. There's also enough local color to keep Central Coast readers happy as well. The novel is available online at Amazon.com and Barnes & Noble.

This is a brilliant story based in iconic locations which mean more if the reader has visited the Big Surprise area and also Paris. Jade Beach presents a fast moving plot with an air of mysticism and a host of colourful characters. thoroughly enjoyable and I can't wait to read the third volume.
-- Peter Simpson, NetGalley
____________________

I had a blast reading Jade Beach Vol. II, which surprised me a bit. I tend to stick to the Booker Prize sort of reading list -- and didn't expect to enjoy a romp through the Big Sur-Hollywood infusion. But now you have me hooked. Hurry up and release the next one, would you? I need to know what happens next to every one of the great characters in the series!
-- Patricia, Aptos, CA
____________________

I just finished your book!
it is a strong character-driven story with interesting subplots involving sexual relationships, healing, Hollywood, escaping death, and the bonds of friends. I enjoyed reading it with Big Sur providing a great backdrop. I was not sure what to make of the ending -- Dyanna leaves Jacob behind? I guess she needed more. I love the graphic encounter on pages 164-166. It made me think back to the marathon, carefree #*&$*%&# days of my youth. Good job!
-- Brian, New York City
____________________

I finished your book and passed it on to a dear friend! I was anxious to start JADE BEACH Volume II because of unanswered scenarios. Your writing is easy and pleasant and especially fun for me because I love Big Sur and have many fond memories there. Thanks for what you do...keep it up!
-- Gail, Carmel, CA
____________________

We really liked Jade Beach Volume II. We shared with a couple of friends who are reading it now! Just wanted to let you know it was a good read and you're really, in our opinion, a very good writer! Looking forward to the next one, your writing style is multi-seasonal and wonderful!