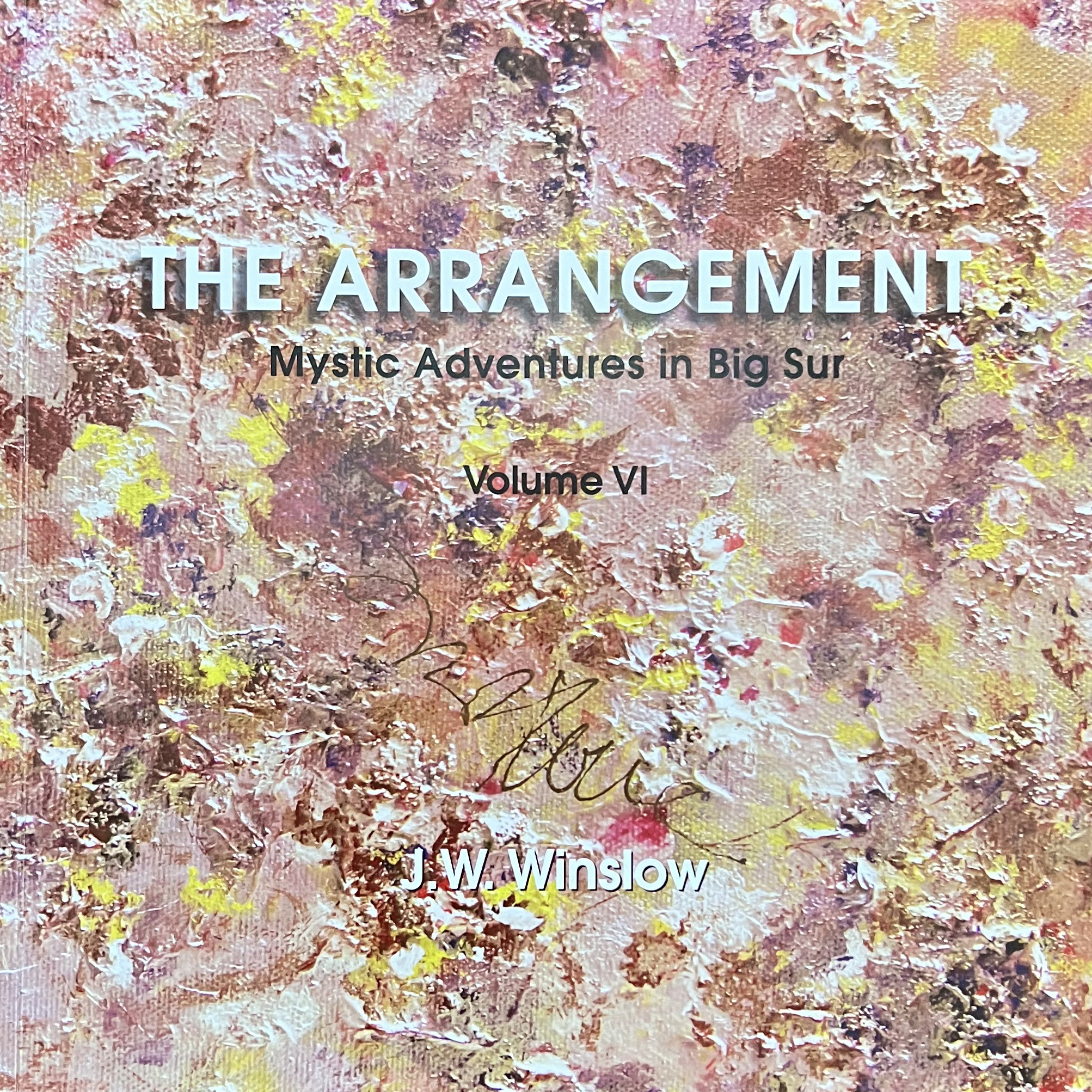 Listen to The Arrangement original music.

The world of DYANNA FALCONER has changed immensely with the birth of her daughter LILY-JADE and the terrifying kidnapping they experienced. Now she labors diligently on ENDLESS LOVE, the fabulous film developed by producer JACOB WALNUT, and delayed by DYANNA’S pregnancy and birth. She is anxious to begin work on the project, but STEPHEN HAWK wants his wife at home!

UMA is grumpy as she recovers from a bad fall and broken shoulder, while HAWK and GABRIEL labor over the new clinic for children in BIG SUR. JOHN SOARING MEADOW watches his pregnant lover GINGER grow more ill by the day. Something is wrong there, very wrong.

DYANNA introduces UMA to her friend PABLO LAHNA who works at Big Sur’s ESSALEN Institute, and once convinced film star KEVIN STONE to change his life. JOHN SOARING MEADOW admits that GINGER is in bad shape and needs some help. She has refused any care for nine months, unbeknownst to the family!

So begins the wild ride of DYANNA and her family, with the sale of the ENDLESS LOVE script to the crack team of SIN CITY filmmakers. HAWK and UMA arrive at GINGER’s bedside to find her in dire straits, unable to speak! They transfer her to the new clinic site immediately, where she will have the best care.

BELINDA remains at the WALNUT mansion in Los Angeles, after meeting attorney BRIAN SHOUPE. They become lovers immediately and she moves in with him. SLOW DOVE returns to Big Sur with DYANNA, fully aware that his first love has moved on.  And now, the SIN CITY deal highlights DYANNA’S talents and she asks for special “points” in the deal!

HAWK is furious with DYANNA for traveling to SO CAL while he and UMA attend to GINGER. They deliver a tiny son, just before her death. It is a bitter pill for JOHN SOARING MEADOW, as he names the boy MEADOWLARK.

DYANNA meets with the SIN CITY guys and the WALNUT BROTHERS, asking for her share of the take on ENDLESS LOVE.  She feels the satisfaction of equality
with both partners. JACOB WALNUT smiles at the woman he loves (and cannot have).

JOHN SOARING MEADOW takes the body of GINGER and escapes to the wilds above the ranch. He buries her remains in a secret place, and leaves a fake trail behind. HAWK and GABRIEL go after him, knowing that the body is expected at the morturary in Monterey. HAWK is responsible to the County of Monterey and fears going back for a second round of prison.

THE ACTION ignites with DYANNA returning home, a dangerous chase of JOHN to his burial grounds, while SLOW DOVE begins plans for the big tribal celebration of LILY-JADE’s first birthday.  The wild lovers of HAWK and DYANNA come together, while BELINDA captures her new man for good. EVAN GALBRAITH honors his beloved GINGER at the celebration with new music and soaring guitar riffs. UMA carries the tiny MEADOWLARK, followed by DYANNA and LILY JADE! It is a spectacular event!

ALL OF THIS is wound together with the story of MAX, who was DYANNA’S mentor and dear friend. She goes back to the beginning in a reverie that will touch your heart and soul.

DON’T MISS A WORD OF THE ARRANGEMENT, AND SAVOR THE STORY! JW WINSLOW HAS AN UNFORGETTABLE TREAT FOR YOU, IN YOUR HANDS!

It is with happy anticipation that I am able to read the latest, book six, to be exact, of J.W. Winslow’s epic series, Mystic Adventures in Big Sur. The official title of this book is the Arrangement and it did not disappoint and, in point of fact, it is an excellent addition to the series.

It is great joy to visit and experience once again the interesting and soulful group of continuing characters. My favorites are; Belinda, John Soaring Meadow, Uma, Jacob Walnut and, of course, Dyanna, who gives this series it’s most beloved character, just to narne a few of my favorites! I would also be remiss not to mention a couple of the newer characters …. Slow Dove and Dyanaa’s lovely daughter, Lily Jade who I fell in love with from their inception to the series!

All of of us who have been along for the ride since the beginning of the series and eagerly anticipate each new vol111ne, have to be wondering when Endless Love, Dyanna’s fil1n project, will finally come to fruition, stay tuned, I’m sure there will be a resolution to this quest in, hopefully, book seven or beyond. In the meantiine, it’s a joy to experience and live with the characters one more tiine, they are like family to me, and it’s a great feeling to be able to live and breathe in JW’s descriptions of Big Sur and Los Angeles and other environs of California in this latest episode of Mystic Adventure of Big Sur!I would like to encourage all readers of the Arrangement to seek out the previous 5 books of this series, if they haven’t already, and live with all the adventures of Dyanna from the beginning, a journey well worth taking.

I would heartily recommend this book, the Arrangement, to read as a wonderful story in this continuing saga and as balm to the soul in this era of covid-19, and all the other uncertainties in our modem lives, it’s a pleasurable and uplifting read!!

JUST A NOTE TO SAY HOW MUCH I ENJOYED THE ARRANGEMENT! I HAVE READ ALL THE BOOKS AND APPRECIATE THAT THE STORYLINE IS ONGOING. YOUR WRITING IS SUPERB! I LIVED IN CARMEL VALLEY IN THE SEVENTIES AND SPENT MANY DAYS IN BIG SUR. IT’S MY SPIRITUAL HOME. MAHALO FOR TAKING ME BACK. WAITING ON THE NEXT ONE!